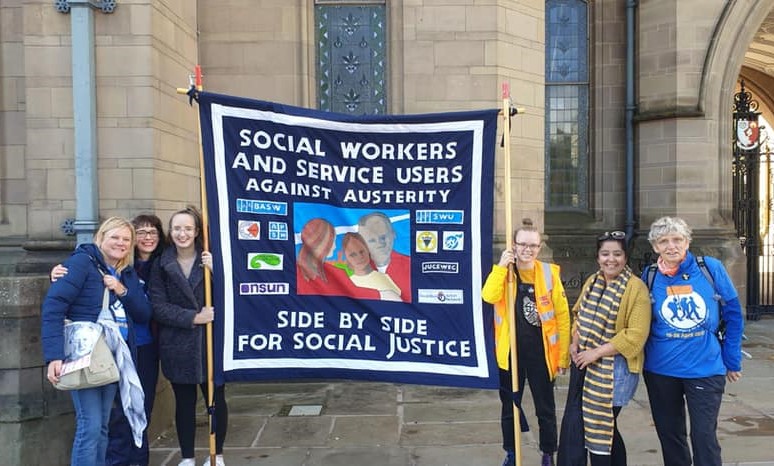 Social Workers and Service Users Against Austerity (SWASUAA) is an alliance of organisations aiming to highlight the impact of austerity and take action against it. Reclaiming advocacy as an essential social work role is needed for our service user and carer voices to be heard inside as well as outside our agencies.

Foregrounding service user and carer experiences requires a collaborative mindset and ways of working. The relationships formed in this alliance enable social workers, service users, and carers to speak together at conferences and other events, making such a shared voice greater than the sum of its parts.

The SWASUAA banner has been marched under many times including the Boot Out Austerity campaign and SWU Union Contacts have been among the marchers.

The Story of the SWASUAA Banner

“The result of the general election in 2015 ensured that the country, and especially its poorest citizens, was going to be facing a deepening of austerity measures and all the misery they entail.  The People’s Assembly Against Austerity organised a huge demo shortly afterwards, and social workers walked together in a bloc under the heading Social Workers and Service Users Against Austerity (SWASUAA), an initiative of Kirk Lewis who was then a student social worker in Wales. This set in motion an anti-austerity alliance of social worker, service user, and carer and disabled people’s organisations – and we needed a banner to organise around and march under.  At an anti-racism demo in March 2016, I bumped into a doctor friend of mine, who was standing with the wonderful banner of the Tower Hamlets branch of the British Medical Association. This was made by Ed Hall, a retired architect with Lambeth Council, who it turned out to have made many of the superb trade union banners seen on demonstrations. He was only too happy to make one for SWASUAA, and the banner he made – in double quick time, so that it could be unveiled at the anti-austerity demo in April – exceeded all expectations in its design and impact. Covered with the logos of the alliance members, it attracts admiration wherever we march with it or display it, and it acts as a rallying point for social workers and others who come and join us beneath the SWASUAA Banner.”