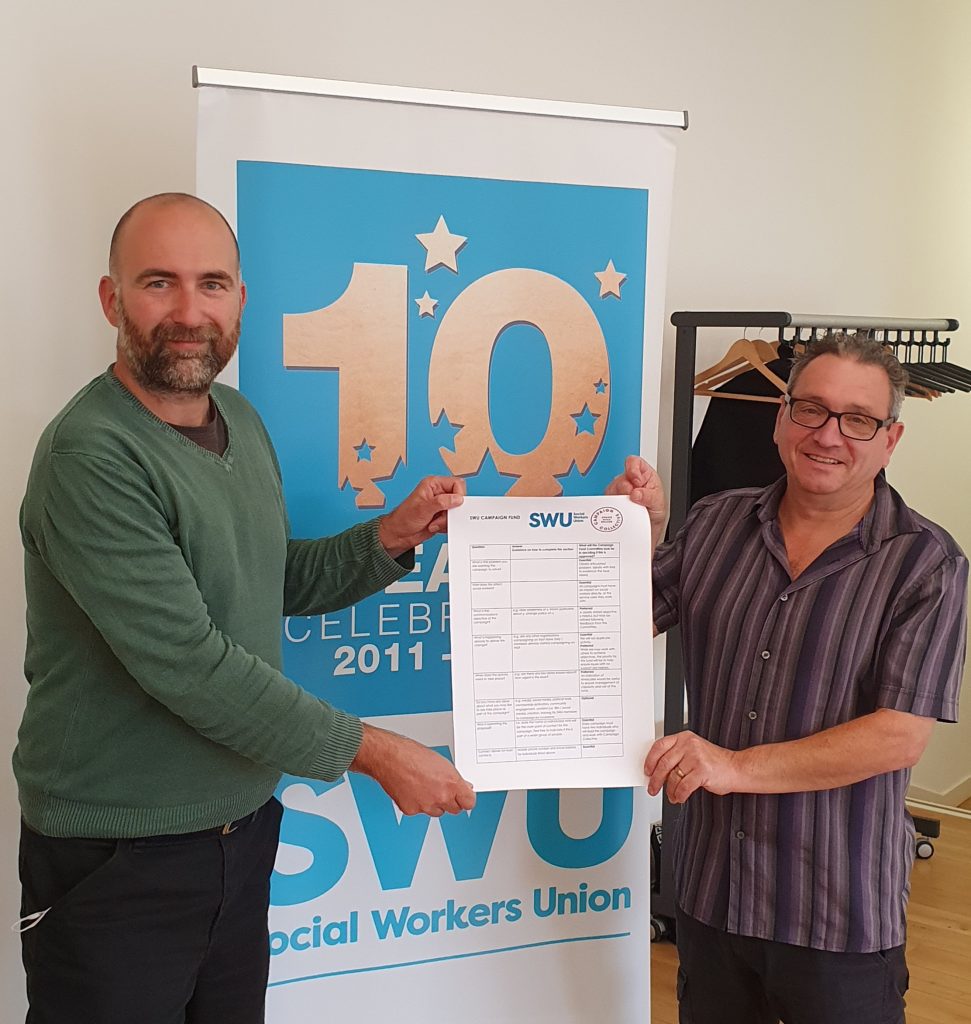 The Social Workers Union Campaign Fund was launched in September 2021 to assist members to develop and help run campaigns throughout 2021/22. Read on to learn more about these member-led campaigns and the team supporting them.

It was envisaged that the Fund could be used to deliver a range of SWU tactics such as:

A “briefing template” was created for SWU members to complete prior to any campaign commencing. This template sets out the aims and objectives for any campaign. A Campaign Board considers applications for development.

Campaign Collective then responds to any request for a campaign with a proposal of activity which is agreed by the nominated social workers leading the campaign.

In 2021/22, the following campaigns have been delivered (or have had spending committed to them):

Food Is Care campaign was supported with research and a news story to launch the campaign, with coverage appearing in Social Work Today, Morning Star, The Rooftop and on GB News.

Media portrayal of social workers was raised as a concern and a new code of conduct for the media has been drafted and agreed in principle with one of the media regulators, IMPRESS. Events and communications to publicise the draft code have taken place and supporters agreed. The next stages of the campaign will see the code launched and promoted. Additional options could also be considered to extend the reach of the code and continue engagement with media outlets to improve reporting.

Emergency support was provided to Social Workers Union officials to help deal with the media response to the Arthur Labinjo-Hughes case.

Part-time work options for social workers have been promoted via research into the lack of job adverts for part time Social Work posts. This was turned into a news story which has so far seen coverage in Community Care, Morning Star, Professional Social Work and The Rooftop. Further activity has been agreed to write to employers’ organisations about the issues highlighted in the research and continue to push for more opportunities for part-time and flexible working.

Positive employers campaign plans are currently being reviewed, but the latest idea is that a webinar about how to take the first steps to change employers’ working conditions will be hosted in summer 2022.

Disparity of funding for social work is a live issue and a plan for how to address this will be developed for SWU / BASW comms staff to consider.

Simon Francis with SWU General Secretary John McGowan will continue to lead activities for SWU campaigns. Simon started his career in technology PR and working for the Irish Government before moving on to operate the communications function for the English government’s youth advice service. Following that Simon worked in large PR agencies working on clients ranging from banks through to the public and voluntary sectors.

In 2016, Simon was one of the Founder Members of Campaign Collective. Simon’s work at the Collective includes communications, public relations and public affairs for The Big Issue, the Disasters Emergency Committee, the End Fuel Poverty Coalition and the Social Workers Union.

One of the benefits of working with Campaign Collective is that, if required, SWU will also have access to wider network of highly experienced team members who have the breadth of skills and range of expertise a communications agency offers. Members and associates range from media specialists, through to experienced grass roots campaigners, web developers, public affairs practitioners, social media content developers and crisis communications specialists.

Simon Francis, Founder Member of Campaign Collective said, “We’re delighted to be working in partnership with the Social Workers Union. The challenges facing social workers and the people they work with are urgent and pressing. Yet too often the media and politicians fail to recognise the issues social workers face on the frontline. We hope this campaign fund will continue to address this imbalance and ensure the voices of the vulnerable and of social workers are better heard.”

John McGowan, SWU General Secretary, said, “This is a terrific way for SWU to support member-led campaigns. Our members are passionate about their union being actively involved in campaigning, and this rekindled partnership with Campaign Collective will help us be even more engaged in activism and continue to make a positive impact. This also builds on our present funding of the Austerity Action Group. With over 15,000 members, the SWU Campaign Fund and partnership with Campaign Collective will be a platform for social workers to feel seen and heard, with social workers being at the root of every campaign.”